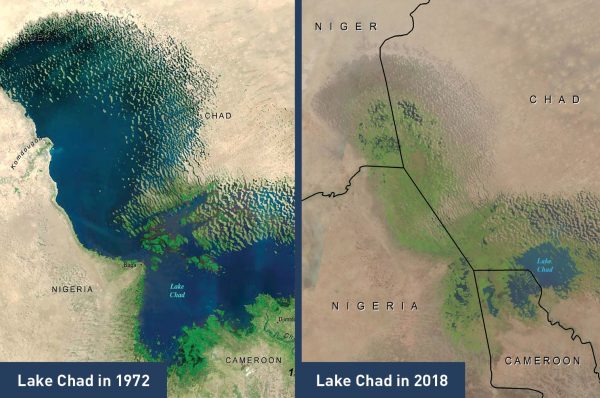 Once azure, stunning, and abundant, Africa’s Lake Chad is a national treasure. Situated at the borders of Nigeria, Niger, Chad, and Cameroon, it’s home to over 50 million people, and over 25 endemic species of African wildlife.

Formerly one of Africa’s largest freshwater lakes, the Lake Chad basin has shrunk dramatically in size over the past 30 years, however, and it hasn’t gone unnoticed.

But what are the environmental impacts of Africa’s ancient lake, and what’s being done about it?

According to the United Nations Environmental Programme  (UNEP), Lake Chad’s decreasing size is one more arresting example of climate change in action.

Initially covering 26,000 km2 in 1963, and measuring just under 1,500 km2 in 2018, the region’s landscape has been transformed from fertile, wildlife-rich water banks to a growing sea of desert.

This raises a host of serious concerns about the impacts on local lives and biodiversity, as the region’s economy and locals’ livelihoods come under serious threat.

Nigerian families, once reliant on the Lake for abundant fishing and farming for livelihood, now increasingly find themselves disrupted without any livelihood at all. This paints a stark picture for a population of 50 million people, 20-30 million of whom once turned to its waters for food, income, and farming. Now, according to the UN, as many as 10.7 million Lake Chad locals are forced to seek humanitarian aid for survival as the area becomes unsuitable for cultivation.

Environmentally, Nigerians are also feeling the burn, as local temperatures in the rise an estimated 1.5 times more rapidly than the global average. This, particularly, has brought natural disasters in the lake region, striking it more frequently than ever before, another well-documented outcome of climate change, forcing Nigerians to deal with the devastating effects of flood, and drought.

Perhaps the quietest victims of all, however, are those that have disappeared entirely. As Lake Chad’s shores recede, so has the area’s once diverse, flourishing flora and fauna. Home to almost a million aquatic birds during the African winter, the vanishing waters signal a rapidly evaporating habitat.

It paints a dynamic portrait of climate change in action, and Lake Chad is just one example of global warming at its most visible.

But there is hope for the region, and its global counterparts, in a more abundant, sustainable approach to energy consumption.

So what’s being done about it?

Climate change, and global warming, result from higher atmospheric greenhouse gas (GHG) emissions. As the world’s population increases and its fossil fuel consumption rises along with it, Nigeria’s GHG outputs have grown by as much as 25% in the past 30 years.

The key reason, according to WRI CAIT statistics, is fossil fuel combustion.

Nigerian grid electricity is produced at non-renewable power sources, where oil and natural gas are converted to power to drive manufacturing, commerce, and transport on a larger scale.

Solar power, in contrast, offers a renewable source of energy by converting naturally abundant sunlight into electricity for homes and businesses, without producing GHGs. It also presents a more reliable alternative for Nigerian families and institutions, in a region where grid electricity is notoriously unreliable, and where diesel generators are often the solution for frequent, unpredictable blackouts.

“Solar reduces the environmental impacts of greenhouse gas emissions and the negative effects of climate change.”

It is why, with Lake Chad in mind, the Nigerian government and United Nations have set the goal of achieving 13 GW off-grid solar cell generation by 2030.

Simply by switching to solar systems, families, and businesses can help to reduce GHG emissions, and play a huge role in achieving this target. And at Sandstream, it is our mission to help Nigerians get there.

At Sandstream Nigeria, we believe that making a difference means acting locally, first and foremost. Some of our efforts to increase off-grid solar cell generation and decrease grid reliance, are situated in Maiduguri, Borno State.

Directly at the heart of Lake Chad’s Borno, Sandstream Nigeria is deploying a 500-kW Community Solar and battery storage solution to provide clean, sustainable power to a large hospital. With an energy yield of 773,525 kWh (Annual Yield 1,547.92 kWh/kWp), the 500kWp PV Generator (AC grid) is designed to be used directly by the hospital’s most critical areas. By reducing an estimated 363,557 kg in annual CO₂ Emissions from diesel generators, it is an objective to improve the quality of air in the hospital.

With an estimated completion date in October 2020, our photovoltaic solution will help one of the area’s most critical establishments to provide Nigerian families with more reliable, accessible healthcare.

We believe that with solar, we can help to combat climate change and enjoy a more abundant, cleaner future. And we believe that getting there means starting here and now.

Learn how you and your community can reduce your carbon footprint by switching to solar with Sandstream.